In the world of applications there is always going to be a phenomenon known as the â€œnext big thing.â€ I have seen hundreds upon hundreds of articles and blogs online discussing what application will blow up before the end of the year.

At the beginning of 2015, I was on the lookout for the next big app, the one that would take over Instagram, Snapchat, and other types of social media that come in the form of an application. Sites like Forbes and Tech Advisor spoke of applications that were supposedly going to make it big in 2015 and obscure the likes of Instagram before the end of the year, yet here we are, 2016 and we still use Instagram. This got me thinking about applications as a business model, and if they would be able to sustain the ever-changing life of the Internet, and I am not quite sure that they will be able to do that, especially when it comes to social media.

When you think about an app where you can share pictures with your friends, the first thing that comes to mind is probably Instagram, but what is the next application that you can think of easily? When scrolling through your applications on your phone, do you find a plethora of apps that serve a similar purpose or just one or two? And if you do just find one or two apps, do you think that you will ever use another one? When Facebook bought Instagram back in 2012 it was clear that social media as a whole was not just a business model, but a single business, that had the goal of taking over socializing online in itâ€™s entirety. I wondered if that mentality would stick around, and clearly it has. 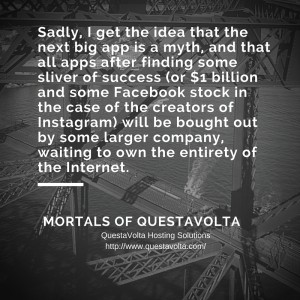 Facebook has bought out socializing online, and the sites that are left (like Tumblr, LinkedIn, maybe thereâ€™s even some Myspace users out there still!) arenâ€™t necessarily struggling to keep up, but they are aimed at a very specific person. The people who create Tumblr accounts are most likely high schoolers with a penchant for angst, but there wonâ€™t be middle aged women or men newly creating accounts. A site like Facebook, on the other hand, has everyone targeted and continues to get people online that would never be otherwise (children in Africa, India, and even the 82 year old grandmothers).

Sadly, I get the idea that the next big app is a myth, and that all apps after finding some sliver of success (or $1 billion and some Facebook stock in the case of the creators of Instagram) will be bought out by some larger company, waiting to own the entirety of the Internet. The days of small business application startups may be coming to an end in the way of social media, but I have a hard time believing this will ever fade away for games, there is a new wildly successful game coming out every week.

GET a quote on A hosting
package FOR YOUR NEEDS